Her body proportions as can be seen under her phantom thief costume is perfectly replicated as she is displayed in a dynamic pose. This sculpt showcases a lovely finish that can be enjoyed from any angle.

The brilliant roses of the base, Kasumi’s ribbon floating around her, her dignified yet adorable expression, and her long sword and mask are recreated with exact precision making this figure a must-have for Persona 5 fans worldwide.

During the annual Winter WonFes 2020, Kotobukiya presented the unpainted prototype of the upcoming figure of Kasumi Yoshizawa.

Kotobukiya announced that a new figure of Kasumi Yoshizawa from the Persona 5 Royal game is in production. The announcement has been made during the MegaHobby Autumn Exposition 2019.

A promotional picture with the original artwork that inspired this figure was showed by Kotobukiya. 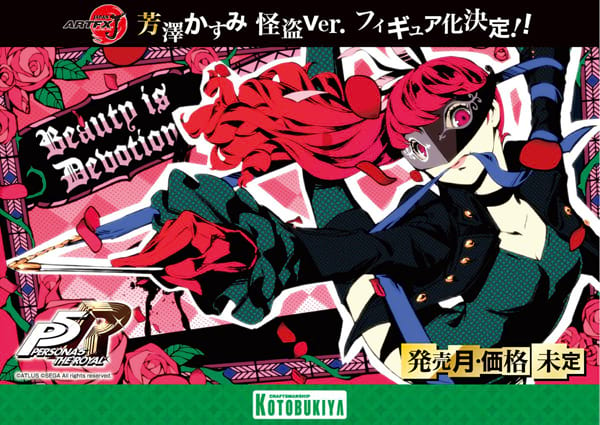 About this Figure | Kotobukiya

Persona 5 Royal has already been released in Japan this October and this means that it’s already time for new figures of Kasumi, the new character introduced with the P5 Royal edition. Phat, Amakuni, MegaHouse and Kotobukiya all announced an upcoming figure of Kasumi Yoshizawa with the Kotobukiya version that is probably one of the most promising.

Read more
close
Start typing to see products you are looking for.
Scroll To Top
We use cookies to improve your experience on our website. By browsing this website, you agree to our use of cookies.
More info Accept